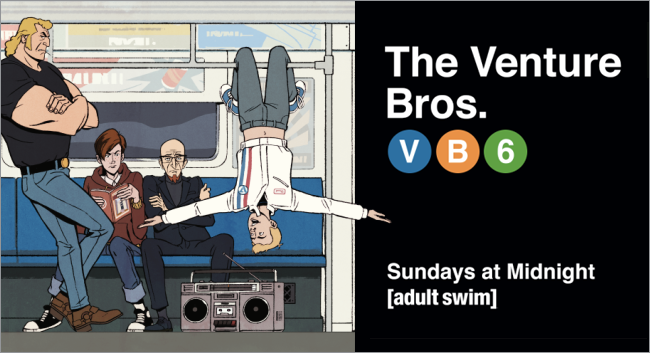 Venture Bros Blog is the ultimate fansite dedicated to The Venture Bros. cartoon. This website is fan-driven labor of love and I have put a lot of work into it. Please make sure you support the cause by visiting the links and learning more. You can also follow our website on all social media platforms.

The Venture Bros. is an American animated television series that premiered on Cartoon Network’s Adult Swim on February 16, 2003. The series mixes action and comedy together while it chronicles the adventures of the Venture family: well-meaning but incompetent teenagers Hank and Dean Venture; their emotionally insecure, ethically challenged super-scientist father Dr. Thaddeus “Rusty” Venture; the family’s bodyguard, originally the ultra-violent and macho secret agent Brock Samson and his later replacement, a reformed supervillain and “cured” pedophile Sergeant Hatred; and the family’s self-proclaimed arch-nemesis, the Monarch, a butterfly-themed supervillain.

Christopher McCulloch, otherwise known as Jackson Publick, announced on March 22, 2011, that the show would be back for 2 more seasons with pre-production to begin in June.

Show creator Jackson Publick (a pseudonym of Christopher McCulloch) was one of the main writers for the Saturday morning animated series The Tick. Ben Edlund, the creator of The Tick, has co-written two episodes of The Venture Bros. and written one full episode, “¡Viva los Muertos!”. Patrick Warburton, who played the Tick in the short-lived Fox Broadcasting Tick live-action TV series, provides the voice of Brock Samson.

McCulloch created The Venture Bros. storyline sometime prior to 2000. After working for the television program Sheep in the Big City and the live-action version of The Tick, McCulloch set to turning The Venture Bros. into an animated series. The Venture Bros. was originally conceived as a comic book story for an issue of Monkeysuit. McCulloch realized that his notes were too extensive for a short comics story and proposed that Comedy Central air The Venture Bros. as an animated series, but the network rejected it. Although the first draft of the pilot script was written in the spring of 2000, the premise was not greenlit until around the summer of 2002 by Adult Swim. McCulloch had not previously considered Cartoon Network because he “didn’t want to tone The Venture Bros. down” and was unaware of the existence of the network’s Adult Swim sub-unit. With the revised pilot, production began in autumn of that year and the pilot was first run on February 16, 2003. The first season of the series was completed in 2004 and it was added to the summer schedule in August.