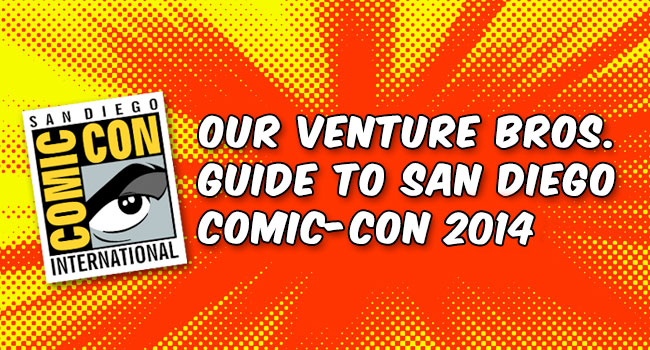 Are you ready for Comic-Con? We put together this handy convention guide to Venture Bros. panels, signings, and events to make your life easier. Featured guests include Jackson Publick, Doc Hammer, co-creators of the Venture Brothers. Be sure to check out Comic-Con exhibitors Adult Swim, Entertainment Earth, and Sideshow Collectibles. View the schedule below and don’t forget to bookmark this page for more updates from SDCC 2014.

Calling all Venture Bros. cosplayers at San Diego Comic-Con 2014! Come join The Venture Brothers Blog and all your fellow Venturoos for a swinging good time at SDCC Friday night in the Hilton lobby bar. We’ll have a costume contest, trivia, raffles, and tons of prizes from Adult Swim! FREE Admission!

Adult Swim will have a Venture Bros Signing on Saturday, July 26th from 12-1pm at Adult Swim Booth #3721. Visit their booth early for signing tickets and information.

Entertainment Earth will have an additional Venture Bros signing with Jackson Publick and Doc Hammer at their booth #2343 on Sunday, July 27th at 12:00pm. Doc and Jackson will be signing Venture Brothers action figures and other official merch. Tickets are required for signing, inquire at Entertainment Earth booth.