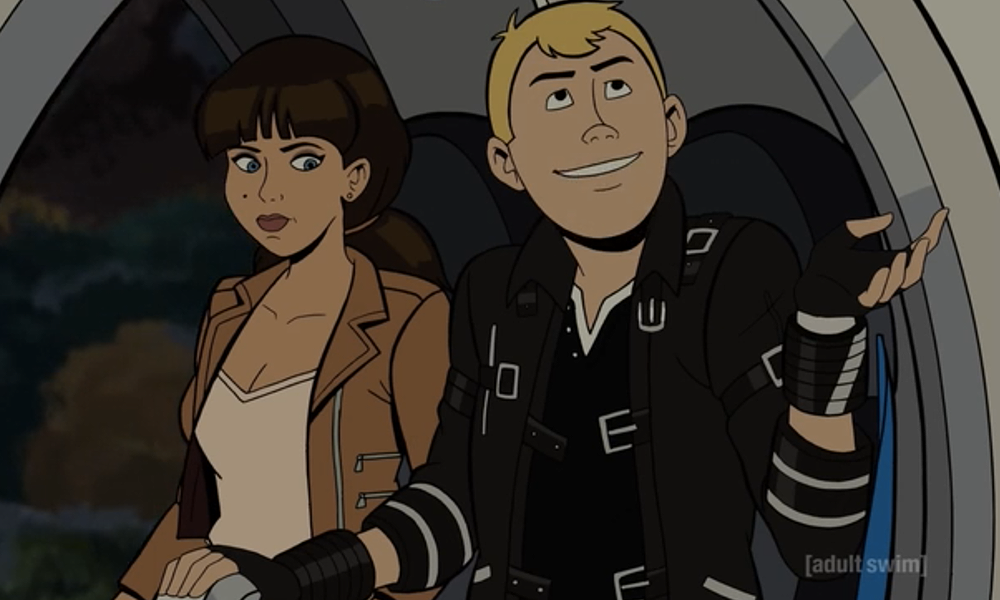 “It Happening One Night” starts with a “Legion of Doom” type structure rising out of the river. Inside there are 10 super villains that are unfamiliar. As an announcer goes around introducing everyone, the camera settles on Wes Warhammer. He announces that they should get Venture.

At the penthouse, Brock is staring at a TV that’s showing the outside of Ventech Tower, much like Andy Warhol’s eight hour long movie “Empire.” There’s also a brightly colored Box of Doom! and a not so cryptic message about how the family will met their doom later that night. The Ventures really don’t care, especially Hank, since he’s finally going on his date with Sirena.

The Guild is is discussing who Blue Morpho might be. Phantom Limb accuses Dr. Mrs. the Monarch of being as obsessed with Rusty as her husband is, since she is certain it’s him in that blue costume. Meanwhile, the Monarch is sneaking out of the Morpho cave as the meeting ends. In order to get 21 out without being noticed, the Monarch distracts her. It’s a pretty brave move to use secret passages while your wife is teleconferencing with the people who are hunting you down. 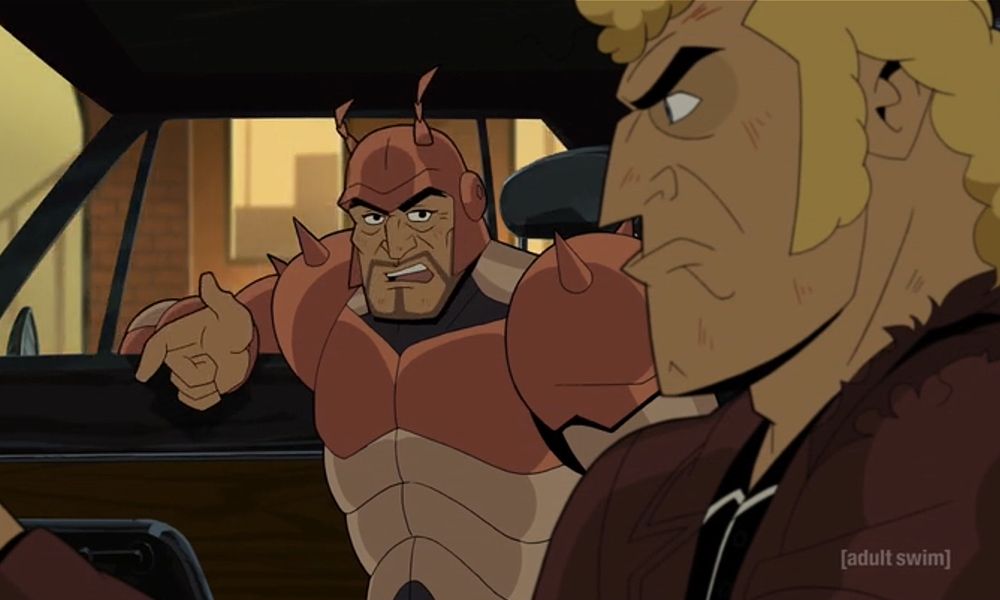 Hank’s on his date. He’s wearing Michael Jackson’s “Bad” outfit, but he calls it his “good” outfit when Sirena comments on it. In true Venture fashion, we see Dean, Billy, and Pete desperately try to make the date more interesting while in disguises .Pete tries to “rob” them so Hank can come to the rescue. Dean plays the bongos while Hank joins in with his bass. Billy’s in a baby carriage, but we never get to find out why.

Back at the Venture building, Rusty and a still very banged up Hatred are playing Team Fortress 2. While Brock is trying to get everyone in the panic room, Hatred rats out Hank and Dean. Brock leaves to find the boys and Hatred gets hit with a tranq dart. The guy really can’t catch a break. At the park, Brock runs into Sirena’s bodyguard, the only Wide Wale henchman he left alive a few episodes back. The trade insults. Brock calls him a “water bug” and he retaliates with “Brock’em Sock’em Robots.” Of course, they decide to team up to find the kids. 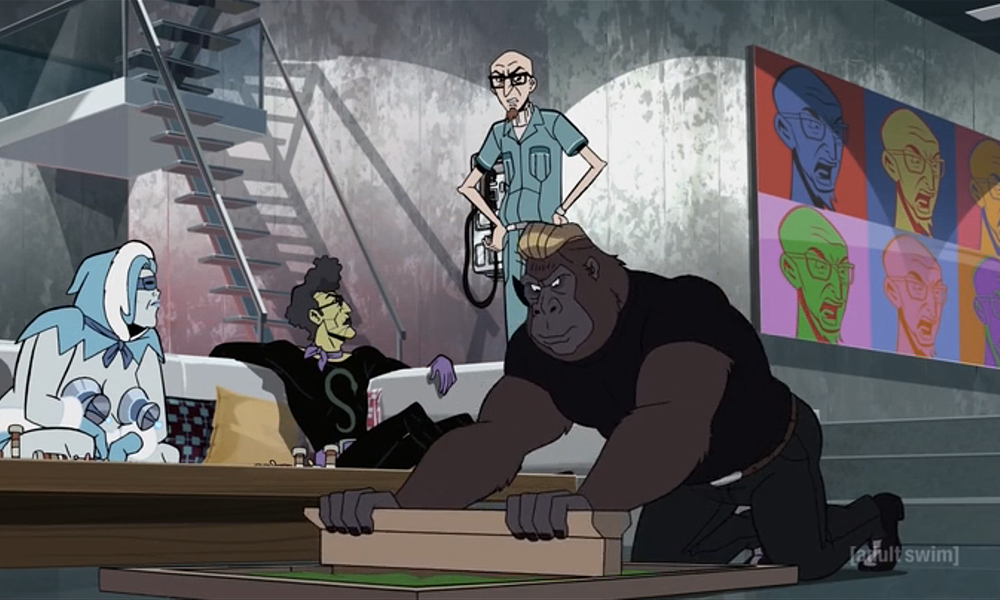 At the Monarch’s place, Dr. Mrs. the Monarch is dressed-up in a farm girl costume, complete with a blonde wig. The Monarch goes along with a Southern accent. Instead of their usual role play antics, the Monarch shoots her right in the ass with a dart. He then goes into the cave to find the Doom Factory. As he and 21 hop on the Morpho scooters, he can’t seem to control it and it just goes around in circles.

We see Hank and Sirena getting accosted by photographers who, of course are just really Dean and Pete. They make their way into a Ninja themed cafe. Their waiter is no other than a costume-less Brown Widow. And Sirena used to date him.

The Doom Factory villains make their way inside the Venture penthouse. They really don’t arch in the traditional sense. Instead, they redecorated and the place looks like it was taken over by Warhol himself. Villains are just hanging out on the couch with mounds of pills. Rusty asks where Hank is and he’s asked if Hank is the name of a pill. When Rusty finally makes his way into the panic room, Warhammer is already there. He starts filming Rusty, telling him to “be himself.” When asked to take off his shirt, there’s a problem. He’s wearing a onesie.

Brock and Wide Wale’s henchman are now sitting in the Charger, and the pissing contest continues. He gets in some good ones like calling Brock’s hair a “Tennessee Tophat.” They pull up to the restaurant and Rocco takes some more jabs, this time about Brock’s unloaded gun. In the restaurant, Hank gets paranoid and accuses Sirena of using him. She reminds him that they ran into “four different albinos,” but she still likes him and they leave together. 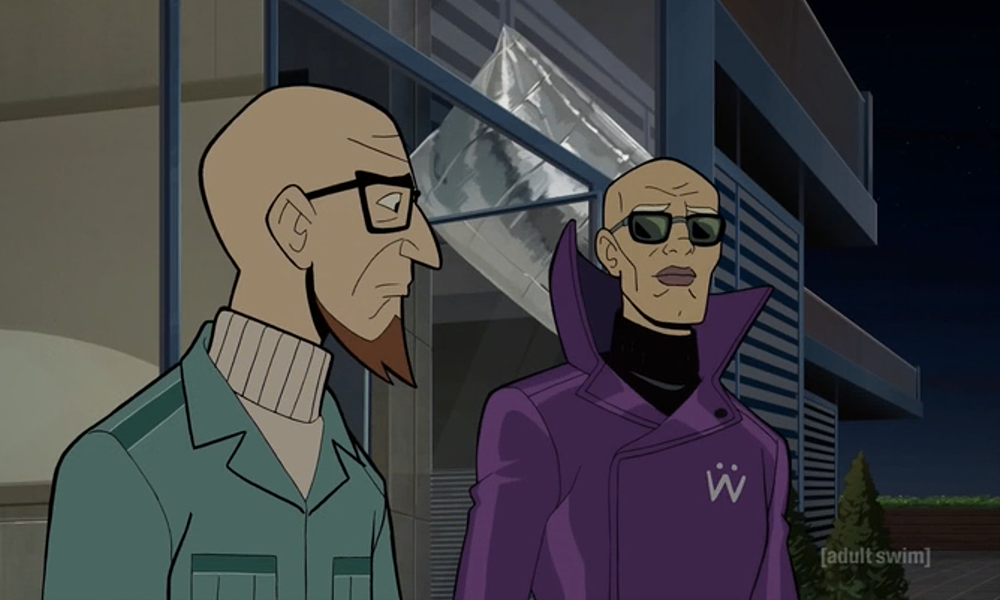 Kano and Blue Morpho are scootering through the sewer. When they reach the end, Morpho falls off and in the water. Just then, the Doom Factory comes rising up. They break inside and Blue Morpho reveals he has a ton of explosives. He promises to “fuck up his lair” and tapes the bombs everywhere. As they go to run out, Morpho’s coat gets caught in the factory. The bombs petered out, but he’s taken away by the flying factory.

At the penthouse, the arch party is still in full swing. Rusty’s really getting into being filmed and his rolling around on a bed in his underwear. The villains actually start doing something villainous and steal his inventions. Someone mentions that “Hank” is now the name of a pill.

Brock and the bodyguard try to raid the Ninja restaurant. Brown Widow shows up in his costume and impresses his fellow waiters. Hank’s not there and to make matters worse, Brock accidentally punches Pete with all his strength. Meanwhile Hank and Sirena are near the water. She jumps in and he soon follows. She mentions that she must be in water every six hours due to her “condition.” They kiss and float to the bottom of the river. 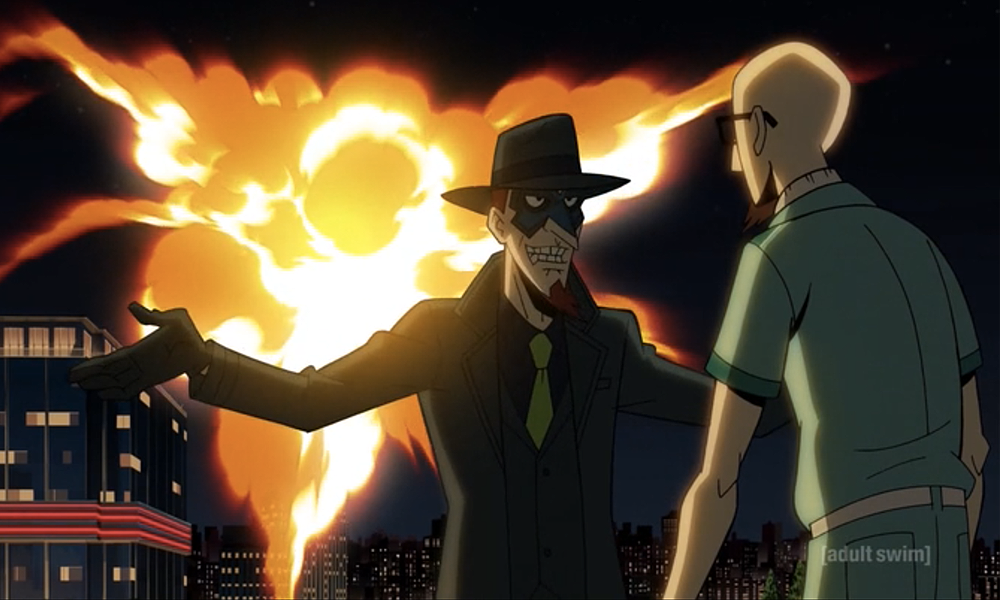 The stealing continues and Rusty’s feelings are hurt. He genuinely thought that Warhammer felt he was special. It’s okay, though, because Warhammer gives him a gold watch that lets him talk to god. It turns out that it’s just Rusty communicator watch. The Doom Factory flies up and Warhammer gets in. As it’s leaving, it finally does explode when the trigger falls out of Morpho’s pocket. He’s safe on the balcony and he’s happy with the beauty of the explosion.

After the credits, Dr. Mrs. the Monarch is waking up. The Monarch is on the floor wearing his robe. She immediately thinks Morpho attacked both of them. She contacts Phantom Limb and he promises to help her catch the mysterious Morpho.

The Venture Bros. ‘A Party for Tarzan’ Recap