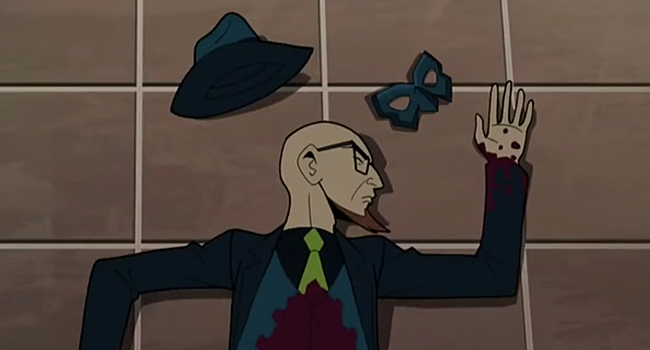 In this week’s episode, “A Party for Tarzan,” we get a crazy opening that starts with Dr. Mrs. the Monarch sniping Rusty from Wide Wale’s balcony. This goes right into 21 narrating the story about how he became a Monarch henchman. Way back in season one, we briefly heard that he was kidnapped as a teen by henchmen. Gary Fisher, as he was known as back then, was mistakenly taken. The real target was Senator Nighthorse Campbell. The Monarch was convinced that somehow a senator would help him make the “Venture” name illegal. Of course, his men kidnap a kid instead. The scene quickly switches to present day 21 and the Monarch who reluctantly plans to “thwart” Dr. Heinie, a low level villain who is on par with him.

Next, Dr. Mrs. the Monarch narrates a Guild meeting where we learn a ton of backstory about the original Blue Morpho. He was the “junkyard dog of the Ventures.” In 1973, Dr. Z thought he was having an affair with tennis star, Billie Jean King. However, it turns out that it was the Blue Morpho the entire time. Dr. Z still doesn’t know how Morpho pulled off the stunt, but he asks everyone just to chill out since it was the ‘70s. Dr. Z also says the Sovereign took out Morpho in 1976.This of course, is the same year that Vendata was built, adding more credibility that Morpho was turned into the former Guild councilman. 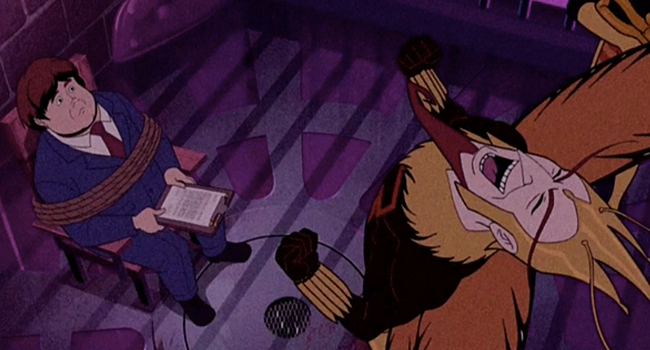 At Ventech Tower, Rusty is giving a speech on how many times the family as been attacked lately. He then begins to tell a story about how he went to a party with Billy and Pete. At the party, he sees Christopher Lambert of “Highlander” fame and talks to him. He agrees to go to Rusty’s lunar eclipse party.

At the Morpho cave, the Monarch puts on his old costume in order to pay Dr. Heinie a visit. 21 is left to deal with the next Venture arch, Wandering Spider. He lures the spider into helping him load a couch into van, much like Buffalo Bill in “Silence of the Lambs.” He then knocks him out by shooting him with a blue mist.

Rusty and Dean are at the tailor, Enzo’s, shop. Rusty asks for a speedsuit called “the patriarch.” Since the suit is a “bitch” to make, Enzo tries to get Rusty to settle for something else. Once he leaves the room, Rusty spies Morpho’s suit hanging up. Rusty being Rusty, he steals it. 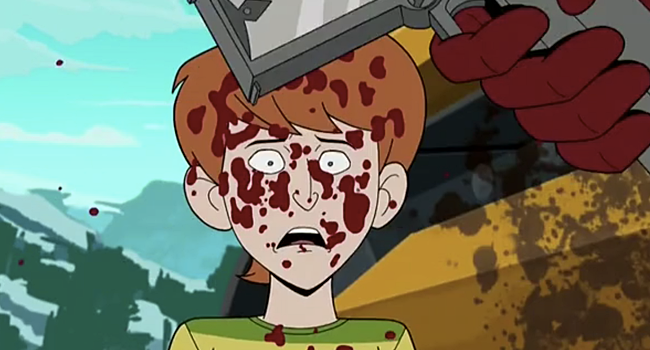 On the subway, the Monarch narrates the beginning of how the rating system in the Guild came to be. Years ago, a villain named Turnbuckle tried to kidnap a young Rusty at the Venture Compound. The Action Man put a stop to it by pistol whipping the hell out of him. When the villain revealed he was still conscious, Action Man shot him. This led to the ranking system where villains and their arches would be paired up by how important or well equip they were. The Monarch remembers when he had a full crew, and the Cocoon. He was a level 9. Now being that he’s riding the subway and is down to one henchman, he’s a 4.

At the Monarch house, Dr. Z and Dr. Mrs the Monarch are examining a gun with the Venture logo on it. He mentions that Rusty’s arches are being killed off one by one. They try to reach the Wandering Spider, but get his voice mail. Meanwhile, 21 as Kano has Spider in the New Jersey Pine Barrens, which is where the Monarch’s plane went down when he was a kid. Kano wakes up Wandering Spider and tells him to leave a message to the Guild saying he was kidnapped by Blue Morpho. 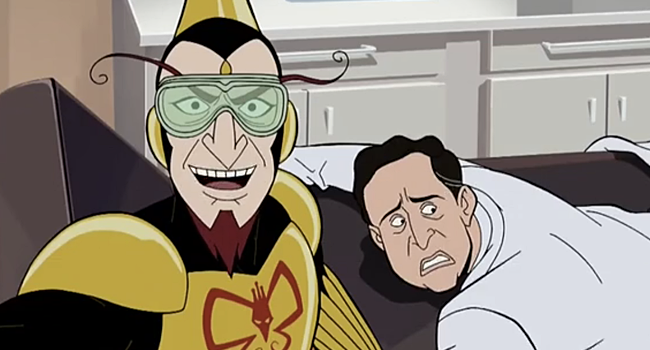 Pete and Billy did a pretty crappy job decorating for the party. Rusty calls it a “baby shower for a teen mom.” However, they convince Rusty that the hats and masks they made are necessary for the eclipse. Rusty, being a total idiot, somehow believes them. Once the lamest party ever starts, Billy is completely drunk early on. Hank’s playing bartender and Rusty asks him for a Ruddy Bottom. The drink sounds disgusting. It mixes rum, tomato juice, and grenadine. Hank confesses he can only make drinks that have the ingredients in their name, like gin and tonic. Rusty teaches him to make it, and promptly spills it all over his fancy Morpho suit. He then goes outside to watch the eclipse.

The Monarch is arching Dr. Heinie and has him tied down with a hemorrhoid laser pointed at him. He’s pissed he can’t get a perfect angle to take a selfie. Kano looks like he’s burying Spider’s metal arms. Meanwhile, members of the Guild are on Wide Wale’s balcony. Wale thinks Rusty’s drink is blood and he urges her to shoot him. She hesitates and Wale digs into her. When she finally does shoot, she regrets it. 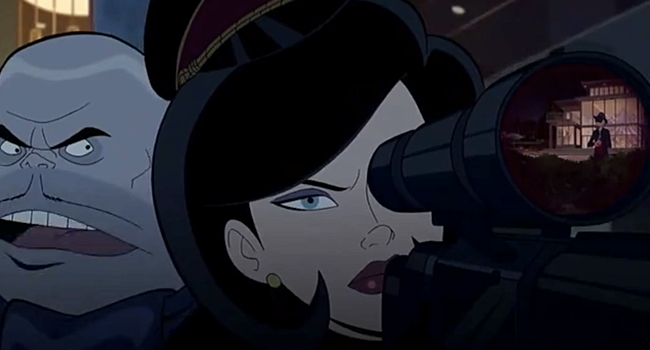 We see the bullet hit him, of course. Since he was wearing Morpho’s suit it’s bulletproof and he’s not dead. The Monarch narrates the scene and claims he returned the suit to Enzo.

After the credits, Dr. Mrs the Monarch spots Christopher Lambert trying to get into Ventech Tower. At last he came, even if he can’t get in.