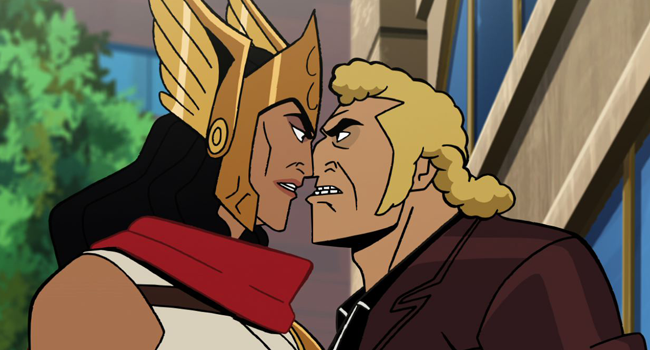 “Rapacity in Blue” starts with Rusty being woken up by a hologram of Jonas Jr. It reminds him that the Science Now convention is days away. Rusty needs to find something to present. This leads him to Pete and Billy. Rusty first tries to just rename a Segway into the “zip arounder.” We also find out that he’s been banned from the convention for the ill-fated Boom Broom from season three.

At the Monarch’s house, Dr. Mrs. the Monarch is talking to herself since her husband and 21 are in the secret cave. The Monarch wants to call the place “the eggsack.” Of course, 21 thinks it’s a horrible idea. He eventually convinces the Monarch that by using the stuff in the cave, they can arch Venture’s enemies without anyone knowing. Their plan is almost discovered by Dr. Mrs. the Monarch, but the two close the passageway to the cave and cover up their tracks by doing an awkward tango.

Back at the Venture’s Pete and Billy take turns showing Rusty some inventions. Pete has a silent washing machine and a way to create free electricity that’s been compared to slave labor. Billy has Prometheus gas which can regrow a liver. Unfortunately, it keeps growing livers and lab mice are exploding because of it. His second idea is a “god gas” that causes religious visions. It doesn’t take long for them to realize it’s basically mind control gas.

Henchman 21 finds something in the cave that the Monarch should view alone. The scene is one big reference to “Empire Strikes Back.” 21 is wearing “geek robes” and serves as Yoda. 24 even chimes in for a minute as the ghost of Obi Wan. In the cave, we see a video of Jonas with Blue Morpho. They’re playing it up for the camera and joking about whether Morpho is a hero or villain. Two girls enter the room and it’s clear there is going to be some key party type action. The scene ends with Jonas’ “Go Team Venture!” 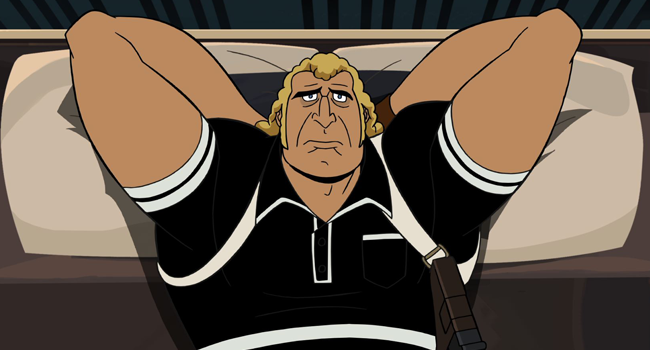 Next we see Pete, Billy, and Dean experimenting on mice with the god gas. Throughout the rest of the episode, the mice develop their own society which includes a golden idol with Billy’s head and setting themselves on fire.

Meanwhile Brock is giving Hank relationship advice for his date with Wide Wale’s daughter. Hatred’s voice over the com interrupts them with a “code green.” It seems Hatred has been taken hostage by Harangeutan, a villain that is more like a huge annoying humanoid than ape.

Outside the Monarch’s, he’s on the phone with his wife who is asking about Guild forms. She wants to present his case to get his arching level back, but he can’t be bothered by the paperwork. Manolo tells the Monarch he doesn’t care about his problems, but he just takes the indifference as advice. Next, he’s back in the cave, preparing to become Blue Morpho. It cuts to them arguing about directions in the car. They mark Harangeutan as their next mark. 21 tells Monarch he needs to shave the goatee and he does.

Billy, Pete, and Rusty argue over what to do with the god gas. Pete made a gun for dispensing it, Rusty wants to test it on humans, and Billy doesn’t think it’s ready for anything. Meanwhile outside, Brock is fighting Harangeutan. Warriana shows up and takes the villain down with one shot. Brock’s not happy and Hatred’s in the hospital. Rusty decides to test the gas on Harangeutan. But, the gun explodes and gas fills the room. Harangeutan sees Rusty and Billy as devils. Billy sees Rusty as he was in his boy adventurer days. Brock runs out of the building with Rusty following him. Blue Morpho and Kano show up and save Billy from the villain. 21/Kano kicks him down a pit. A confused and gassed up Billy tells Blue Morpho he knows who he is. Outside, Rusty is on the ground and Morpho helps him up. 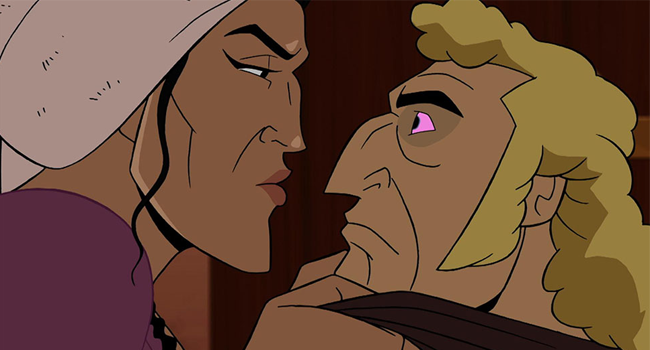 Brock is seen in another building using a doorman as a door knocker. He’s at Warriana’s apartment and freaking out from the gas. After a weird seduction, she takes him inside. Back at the Venture building, Billy tells Rusty that his secret is safe with him. Billy completely thinks the Monarch was Rusty.

After the credits, We find out that the Blue Morpho’s car was towed since there was only a few old coins in the costume’s pockets. 21 and the Monarch walk into the house to find Dr. Mrs. the Monarch home early. It was supposed to be their date night and she’s pissed the Monarch was gone. They cover up their outing by saying they went on date night instead.

What did you think about the new episode? Sound off in the comments below!

Episode Recap of “Everybody Comes to Hank’s”