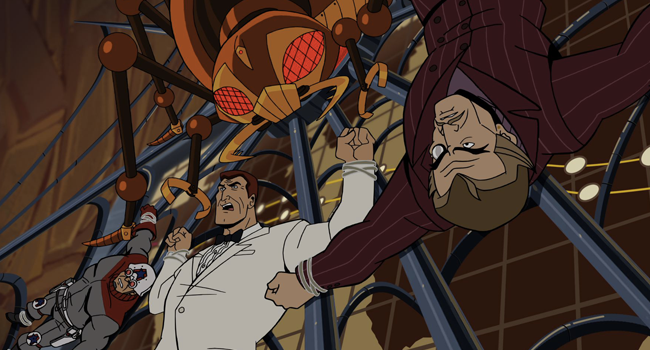 This week’s episode, “Faking Miracles,” starts off with a throw back to the original Team Venture. They’re being held by Scaramantula’s mechanical spiders. Things are looking bad until a blue car with a butterfly symbol comes crashing through the window. The rescuer is the mysterious Blue Morpho. He quickly shoots up the scene with some very familiar tranq darts. Dr. Venture is skeptical of him at first, but we learn they later team up to fight L. Ron Hubbard.

At the newly discovered cave, 21 is telling the Monarch everything he found out about Blue Morpho. He’s getting his information from a comic. Unfortunately, the comic only lasted six issues. 21 tries to convince him that Blue Morpho is his father. The Monarch isn’t buying it, since he remembers his father as a drunk New York socialite. It’s pretty clear that Jonas and the Monarch’s father knew each other. The Monarch also isn’t impressed with the theme, as he doesn’t realize morpho is type of butterfly.

Next, we see Brock and Hank running at the park. Lagging behind them is a very tired Dean who decided that dress shoes would be proper running attire. While Brock is helping him, Hank spots the girl from the pool. As he tries to talk to her, Wide Wale’s henchmen taser him. She’s Wale’s daughter, Sirena, and the girl he that thought was drowning back in the first episode of the season. 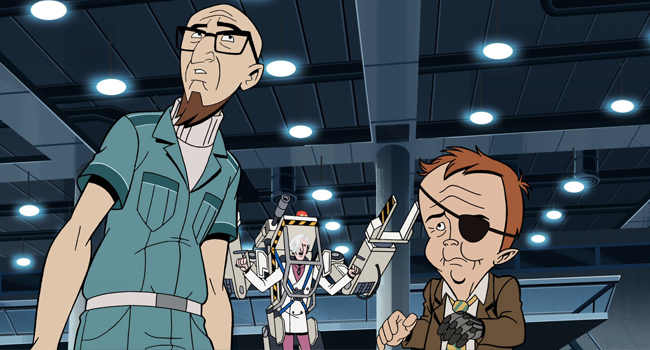 Pete and Billy have made it to NYC and are being shown around by Rusty and the Captain. Billy is riding around on a circular hover vehicle called the Go-pod. Rusty immediately wants to put the pod in production, but the Captain warns him that the pod causes sterility, and heart murmurs in rhesus monkeys. When Billy crashes in a wall, the Captain also informs them the machine doesn’t “stop so good.”

At Wide Wale’s place, a Council meeting is underway. We learn that there will be a big party tonight in honor of his daughter’s birthday. She shows up during the meeting, upset that his henchmen overreacted at the park. The only remaining henchman says that he needs replacements, as Brock killed the other two.

Back at the Monarch’s, he’s whining that he doesn’t want to go to Wale’s party. Of course, he rather stay and poke around the cave some more. HIs attitude doesn’t get better when he finds out 21 isn’t allowed at the party. However, 21 suggests that the Monarch can do recon and maybe get his standing in the Guild back to where it was.

Rusty, Pete, and Billy are still messing around with Jonas Jr.’s inventions. Billy accidently spills a silver liquid. It slides up a wall and into a vent. Meanwhile, Dean is taking a shower. The liquid goes up Dean’s leg and he screams. Brock checks on him via a two way communication bathroom mirror. 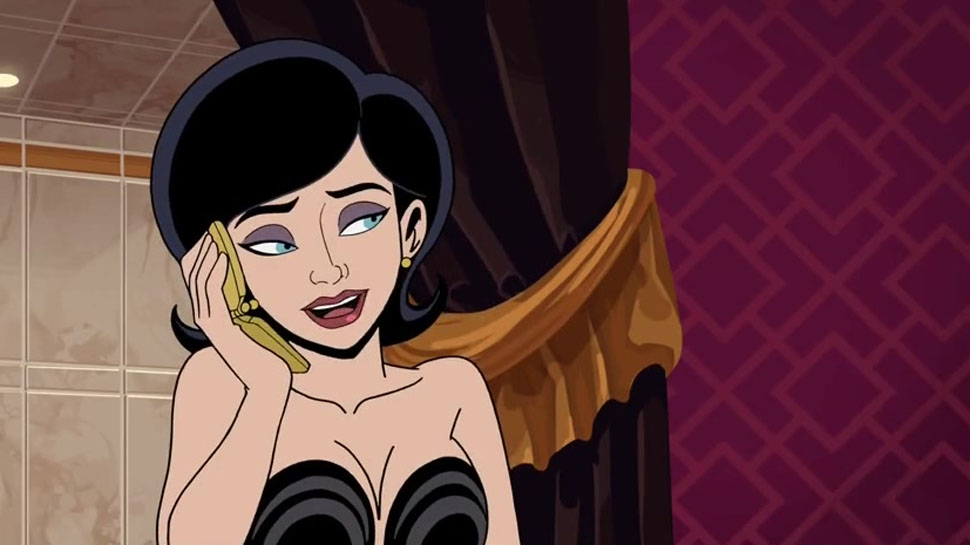 Wide Wale’s party is starting and Dr. Mrs. the Monarch is waiting for her husband. She’s hit on by Copy Cat, a villain who is full of charm and cheesy old pick up lines. She fends him off for now. Wale’s daughter isn’t having a good time. Wale tries to calm her by ordering her favorite pizza. The delivery boy is Hank on the crash prone Go-pod. He runs into the elevator while the Monarch slips in, breaking his bottle of wine in the closing doors.

When Hank delivers the pizza, the henchman recognizes him. Hank hides in a bathroom where Dragoon and Red Mantle are in the tub with Redusa.

The Monarch gets to the party and he’s immediately in trouble for wearing his costume. Copy Cat comes to his rescue and offers him replacement clothes. However, he quickly makes a copy of himself so he can help the Monarch and continue hitting on Dr. Mrs. the Monarch at the same time. While he is getting dressed, Copy Cat puts on the Monarch’s costume and shots him with his own darts. Copy Cat goes to the Venture building and makes dozens of Monarchs. They beat up Hatred and go inside.

In the building, Brock is giving Dean advice about his depressing college essay. Meanwhile, Rusty, Billy, and Pete are still trying to figure out the silver liquid. Rusty decides it must be “robot water.” It’s revealed the liquid is nanobots. Pete and Billy find the instructions and unknown to them, they take control of Dean. They give him super strength, make his heart stop, and have him recite Gilgamesh in Babylonian. Brock is freaked out over Dean’s behavior and tranqs him. 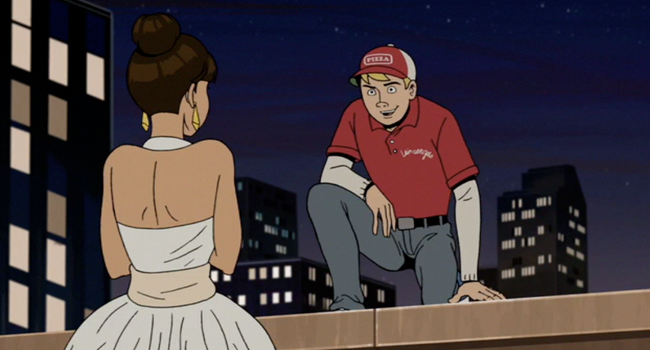 Back at the party, Dr. Mrs. the Monarch complains to Copy Cat about her husband. Through a telescope, he shows her one of the Monarch copies peeing on a couch at the Venture’s. She leaves the party. She finds the real Monarch outside. He’s confused and claims he lost his phone. Of course, his phone rings and it’s 21 telling him Manolo got the car in the cave started. When he turns back to his wife, she’s already gone.

Hank is caught in a lawn chair on Sirena’s balcony. She asks him out on a date, but the henchmen show up again. Hank jumps off the balcony while she gets rid of them. He floats back up with the Go-pod and they agree to go on a date.

After the credits, Dean is having a hard time trying to pee out the nanobots. It’s revealed he did get accepted to college, perhaps with the help of Rusty and the nanobots.