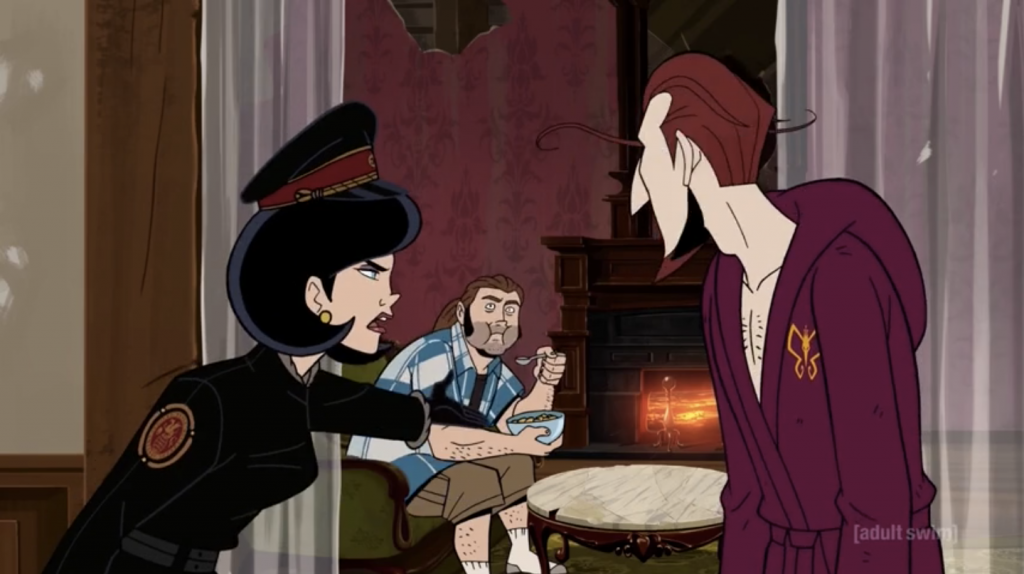 “Tanks for Nuthin” starts with the Monarch and his wife fighting over the arching rights of Dr. Venture. As she’s getting dressed, she reminds him he’s only a level four and Venture is a ten. He needs to hire more henchmen, build a new cocoon and get out there “with his henchman.” After she storms out, the Monarch goes down in the Morpho cave.

Then we find Brock waking up in Warriana’s bedroom with a whip in his ass, as he tries to sneak out, he makes up some excuses about not want to disturb her. Uninterested, she tells him he’s welcome to a cup of coffee and maybe he should make it to go.

Back at the Venture building, Guild Strangers are collecting the body of Harageutan as Dr. Mrs the Monarch is interrogating Rusty. She’s convinced Brock killed Harageutan. She asks for the video surveillance tapes. Rusty says no. Brock walks past Rusty who asks why he’s walking funny and that they don’t need another olean fiasco. Watch and Ward are poking fun at everything as Dean runs into Dr. Mrs. the Monarch with a hand full of flowers, (meant for uncle Hatred) she smack the out of his hand. 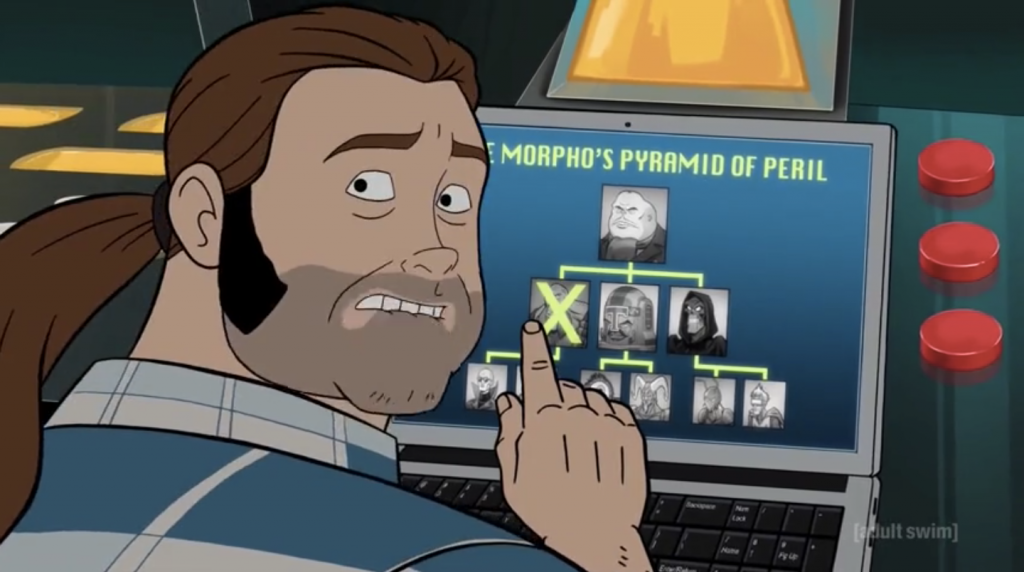 We move to Billy having a god gas meltdown. (Hasselhoff style) It’s being watched by Pete,Colonel Gentleman, Action Man and Billys mom. Billy staggers into the room pleading with Pete to take the video down, but Pete says it has over 80,000 views. Dr. Mrs. the Monarch knocks on the door and Billy’s mom says there’s a Nazi here to see him.

Over to the Newark mayor’s office, a janitor is vacuuming and hears a ringing, he finds a phone in a bust. He answers and we see 21 on the other end hanging up. He’s looking through the remaining Venture arches. The Monarch wants to continue to snuff them out. He even mentions killing Manolo, when 21 states he’s not a murderer, he changes the subject to getting the Blue Morpho car out of impound.

The Guild is reviewing the death of Harageutan. Dr.Mrs.the Monarch tells the Council Billy stated that Blue Morpho was his savior. However, Phantom Limb says Blue Morpho has been dead for decades. Wide Wale is certain he can get the video tapes through bugs he put in the Venture building. First though, she needs to inform Harageutan’s wife of his death. She goes to a bar owned by Harageutan. His wife, Battleaxe, begins to sob over missing his smelly breath and abusive nature. She also wants to know the whereabouts of the Harangeutank. Dr. Mrs. the Monarch promises she will get it back. 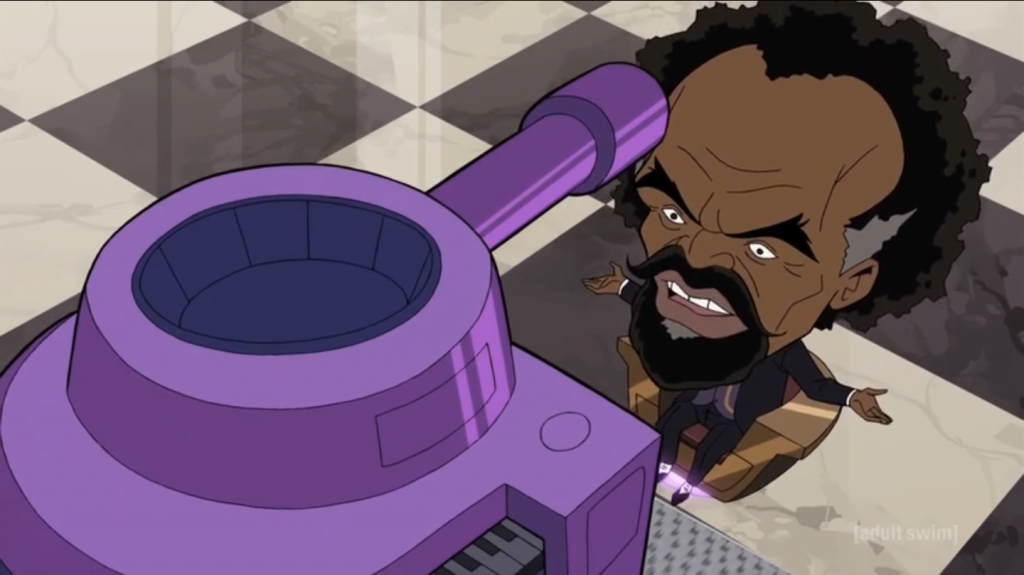 We find Dean at college taking a test under a Nietzsche quoting professor. At the end of class, professor stops Dean to tell him he’s a very bright student, even though his test was crap. He’s worried Dean may very well be distracted by problems outside of class and should avoid such distractions to study. (especially tonight) Dean thanks him, when he leaves the classroom, the professor opens a secret room holding his tank. He is Rusty’s new arch Think Tank! 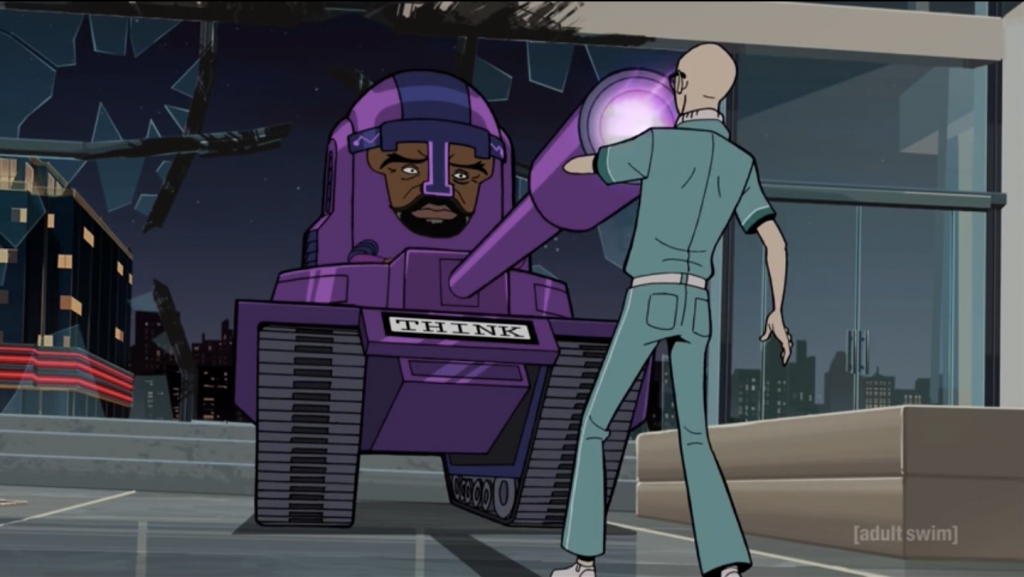 Think Tank shows up at the Venture’s front door. He scans Brock and decides to bypass him, scaling the wall directly to Rusty. He tells Rusty he’s not there to kill him but to enjoy the arch by matching wits with him. He breaks out a chess board and Rusty confesses he’s more of a Parcheesi man. Brock makes his way into the room and finds Think Tank. Rusty is on the phone with the Guild bitching about his new arch. Watch and Ward are on the other end screwing with him. Brock is in full battle with Think Tank. They go back and forth mocking each other when Think Tank blasts Brock out of the building. Flying around the NYC skyline, Warriana catches a wayward Brock. She tries to smooth over the morning coffee encounter saying she’s no good with pillow talk. After hearing about Think Tank, she quickly turns around back to the Venture’s.

Back at the impound garage, Dr. Mrs. the Monarch is on the heels of Blue Morpho just as he makes it to the car. She brandishes her gun demanding that he turn himself in. Battleaxe is waiting in the tank and opens Dr. Mrs. the Monarch’s laptop. She sees the death of her beloved Harangeutan by the hand of “Rusty.” She speeds off as Blue Morpho hits a button and turns the car into the Morpho Jet, flying out and away from his wife. She runs to her limo demanding Watch and Ward to follow that blue plane. She finds it’s headed straight for the Venture building as Blue Morpho requested to Kano, so he can take a dump in the pool. 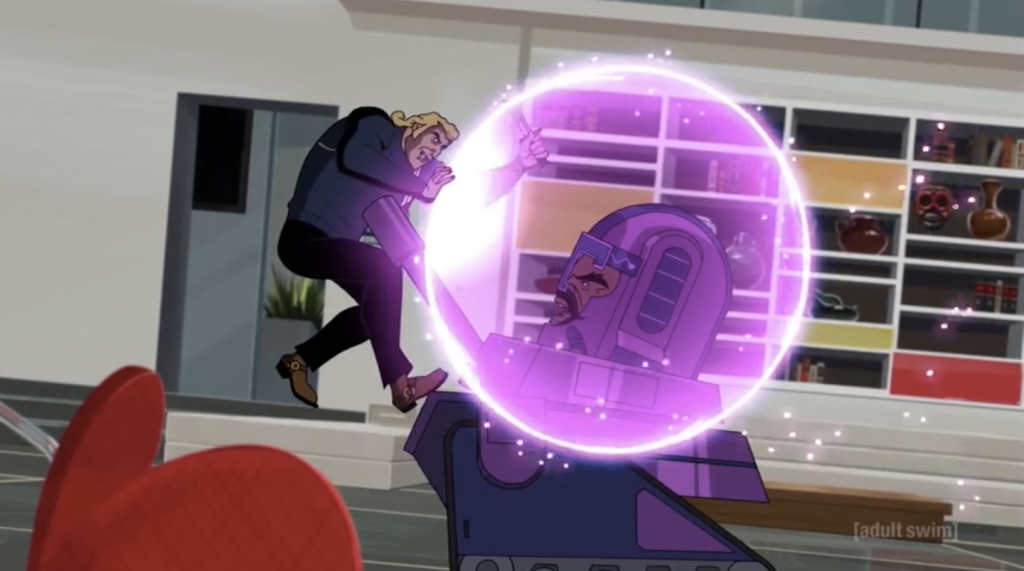 Meanwhile, Brock and Warriana are wrapping up the fight with Think Tank. Rusty’s disgusted after being the phone and having the call get dropped. He sees the Morpho Jet heading towards him as he goes to get Brock. Dr. Mrs. the Monarch is at the bottom of the tower and sees the Morpho Jet fly over the building. Battleaxe crashes into the building and straight into Think Tank. That building is a magnet for villain deaths.

After the credits, we see that Dr. Mrs.the Monarch is home. The Monarch is shaking, scared stiff under a blanket. However, she’s impressed about how the house is coming along and says she’s sorry. She knows who the real enemy is. 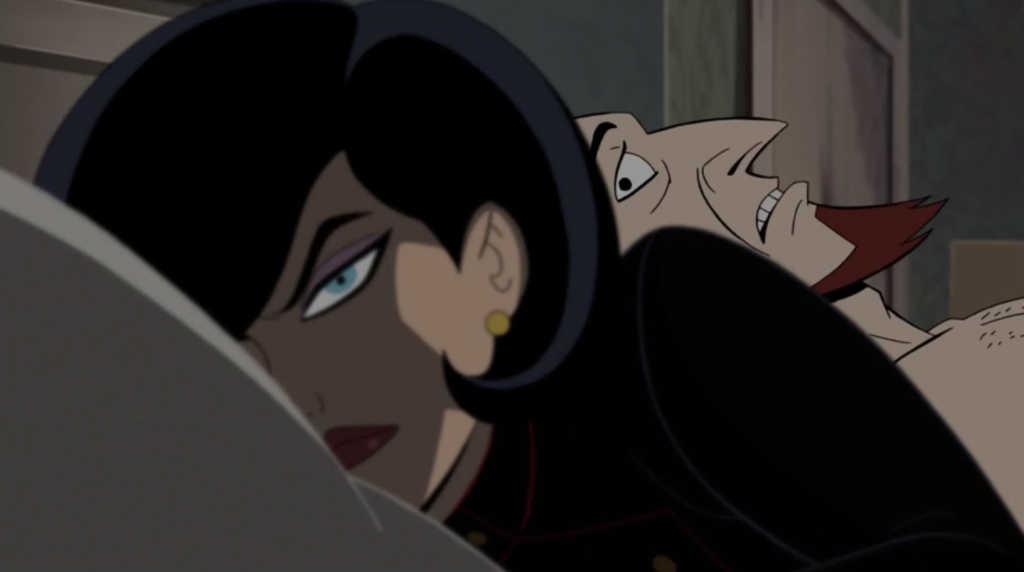 What did you think about the new episode? Sound off in the comments below!

Episode Recap of “Every Which Way…”