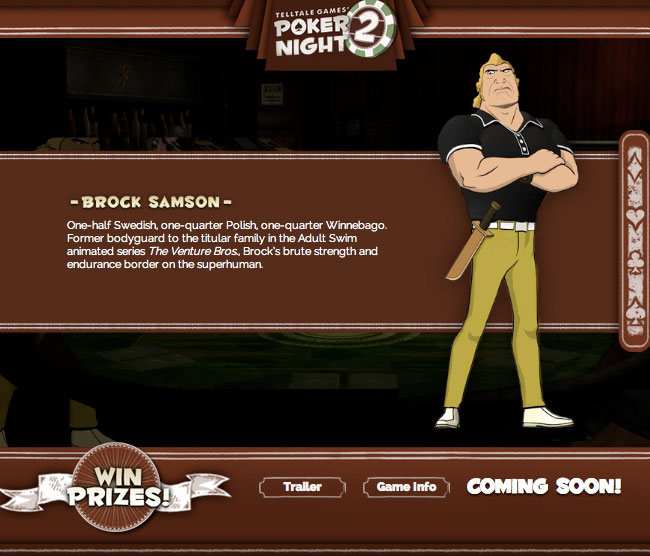 Brock Samson is in Telltale Games’ Poker Night 2! News of the game’s existence was leaked via screenshots depicting Venture Brothers’ Brock Samson and a host of other characters at the poker table; Including Ash Williams from the Evil Dead, Claptrap from Borderlands, and Sam from Sam & Max. Borderlands’ Mad Moxxi and Portal’s Glados will also be playing supplementary roles.

Announced on April 1st at thekeyparty.com, Poker Night 2 is the unnecessary sequel to Poker Night at the Inventory! In the original game, you played poker with a bunch of weirdoes for Team Fortress 2 items and the satisfaction of beating the odds. Now, In Poker Night 2…

Game offers a different bunch of weirdoes officially licensed, triple ‘A’ characters (Claptrap, Brock Samson, Ash Williams, Sam) and more prizes than ever before (depending on the game system you’re using).

Are you a poker wizard? You’ll love it. Can you barely count to 21 or remember what day it is? You’ll love it too because in Poker Night 2, even when you’re losing, you’re winning. And vice-versa.

If you pre-order Poker Night 2 you’ll get original game and in-game items. Poker Night 2 is $4.99 and will be released on April 24th! How can you pass up such an amazing deal? Still not convinced? Let the trailer do the talking and see what lies in store for you!

UPDATE: Poker Night 2 will be available on Xbox Live Marketplace (worldwide) on April 24th. Steam Games will release the game worldwide on April 26th and on PlayStation Network on April 30th. For release updates, follow @TelltaleGames on Twitter. 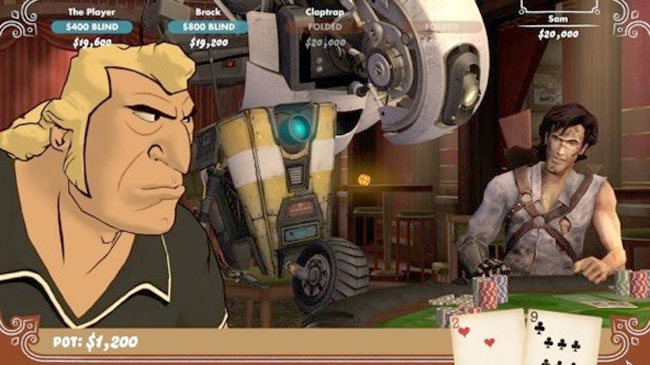