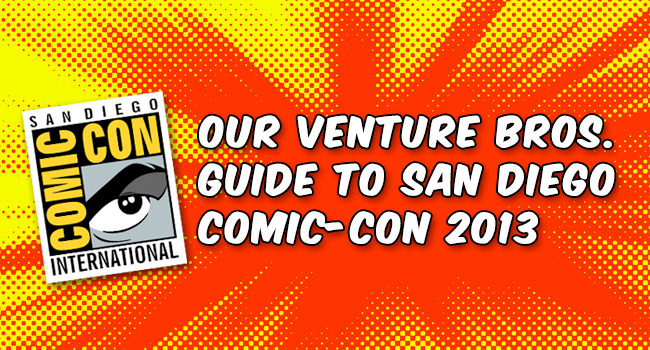 Are you ready for Comic-Con? Our TV friends at the network were kind enough to give us some advance details on all the Venture-related happenings. We put together this handy convention guide to VB panels, signings, and events to make your life easier. Confirmed guests this year include Jackson Publick, Doc Hammer, and Patrick Warburton of the Venture Brothers. San Diego Comic-Con exhibitors include Adult Swim, Entertainment Earth, and Sideshow Collectibles. View the schedule below and don’t forget to bookmark this page for updates from SDCC 2013.

Adult Swim will have a Venture Bros Signing on Thursday, July 18th from 3-4pm in Autograph Alley AA01. Fans need to get tickets for the signing which will be handed out starting at 9am also in autograph alley.

A Henchman 21 Costume Contest will be held during the Venture Bros Panel on Friday, July 19th. The winner of the costume contest will get to model the last Venture Bros. Shirt Club design this season.

Calling all Venture Bros. cosplayers at San Diego Comic-Con 2013! We are organizing a group photo with cosplayers after the panel. Show off your costume making abilities! Suit up and join us for photos at 1:45 on Friday, July 19th. Location to be announced.

Entertainment Earth will have an additional Venture Bros signing with Jackson Publick and Doc Hammer at their booth #2343 on Friday, July 19th at 3:00pm. Doc and Jackson will be signing Venture Brothers action figures and other official merch. Tickets are required for signing, inquire at Entertainment Earth booth.

Doc Hammer’s “Saint” series of paintings is on display at Century Guild booth #2845. Copies of the new Century Guild magazine are available at the booth, the first issue features an article on Doc Hammer’s art and his unique path towards classicism.

Doc Hammer will be signing copies of the new magazine on Saturday, July 20th at 2:00pm. Due to space restrictions, the autograph signing is limited to 100 attendees for autographs and photos.