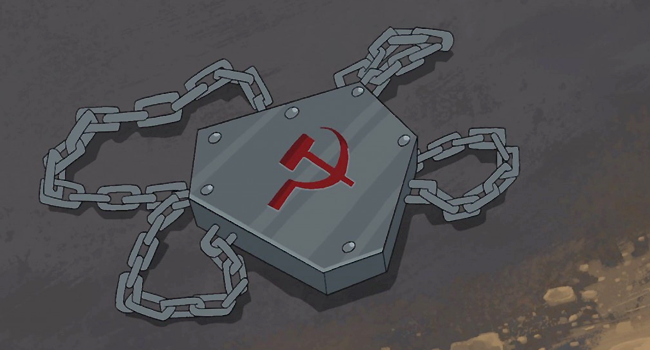 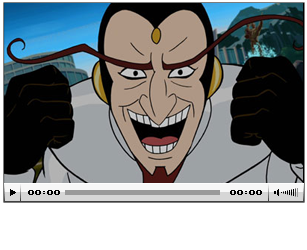 Picking up shortly after the end of “Operation P.R.O.M.,” we see the direct aftermath of the ill-fated party. The hour-long episode is a great balance of old storylines and new ones.

“What Color is Your Cleansuit?” starts with Brock and Shore Leave finding Molotov’s chastity belt on the ground next to the crashed limo. A bit later, Brock stabs “Monstroso’s” body, only to have it pop like a balloon. It’s no shock that these two are still alive, although, the episode doesn’t reveal where they are or how they survived the crash.

The Outrider brings Dean home after his disastrous attempt to win over Triana. When the Outrider suggests talking to his father about what happened, Dean replies just like he did in prom episode, telling him to go fuck himself.

Hank wakes up on the floor in Dermott’s room to find Nikki hovering over him. Rusty wakes up with one the mutant fly girls in his bed. Hatred goes to take Princess Tiny Feet home only to find out she’s shacking up with Scorpio. Of course, the Monarch is still convinced 21’s actions at the prom were just an elaborate plot. Back at the compound, Hunter and the team load up to rejoin the O.S.I., leaving 21 as the only member of S.P.H.I.N.X.

While Jonas Jr. didn’t play a huge role in season four, he’s back and asking Rusty for help with a plasma ray shield for Gargantua 2. While Rusty plans on how to go about creating the shield, Dean is fueling a bonfire with all his possessions on the lawn. He torches his bed, Giant Boy Detective books, and even Mr. Reachy. This new emo/goth Dean wants to be his “own man,” and moves into the attic. Since the deformed Dean clone lived up there until getting blown up in season four, you can’t help but wonder what the real Dean might find up there this season. 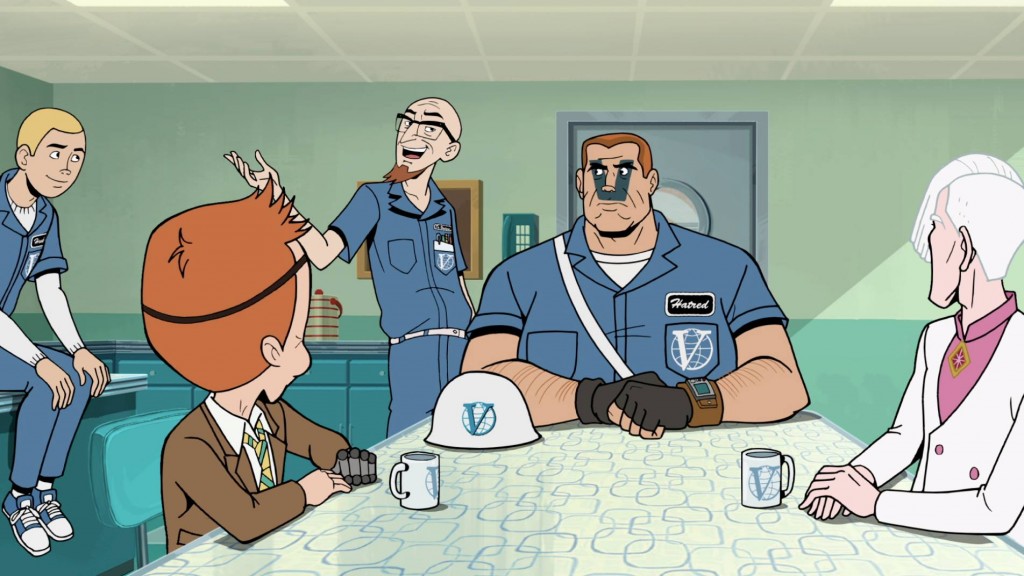 The Venture clan goes about cleaning up the compound (including getting the hostile gorilla out of the E-Den by having Billy wear a meat suit). Dean and Hatred visit State University and recruit college kids to work on the shield project. While there Dean meets a girl, takes a Frisbee to the face, and has pseudo-sexy Lady and the Tramp and Star Wars themed fantasies.

While the getting things ready for ray shield, Billy reconnects with his “arch-nemesis,” Augustus St. Cloud, who drives a stretch Batmobile. Venture fans will recognize him as a well-used “background character” as far back as season one, Tag Sale – You’re It!. St. Cloud becomes a member of the Guild of Calamitouse Intent, solely to arch Billy. He has a “rare, Asian albino” named P.Y. Apparently, St. Cloud is not only upset with Billy for a number of eBay outbids, but because of the cheating scandal on Quizboys. Even after recreating the show’s set, Billy schools St. Cloud, winning H.E.L.P.eR (who Rusty must have sold, along with a plasma engine needed for the shield) and the hover car from the Doctor is Sin episode. 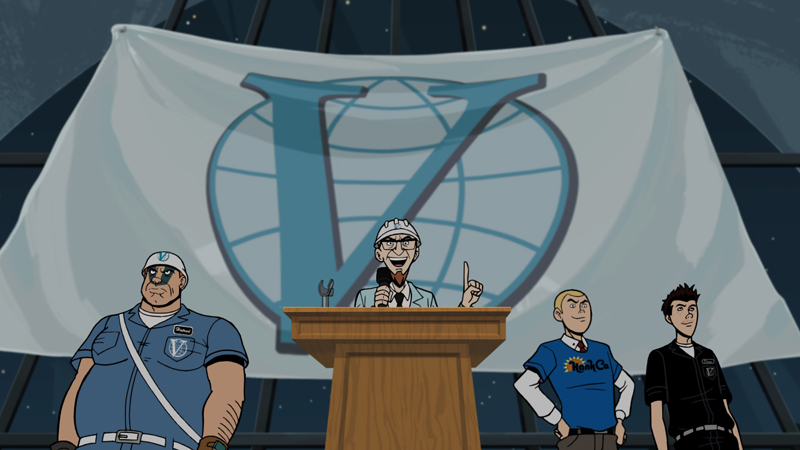 The shield project or “Palaemon” starts in the compound. The groups are divided up by the color of their cleansuits. White and orange classes work on the project, while green class become Rusty’s personal “assistants.” In true Rusty fashion, he half-asses the entire thing. Workers are vaporized, one becomes a ghost of sorts and is trapped in the wall, similar to Mr. Manhattan from Watchmen. The chaos is complete when the different color classes start gaining mutant powers and other deformities. The whites grow extra arms, the oranges become super strong, bug-like beings who eat the green suits. This all comes to head in the E-Den as Dean’s “girl” he met at college transforms into a telepathic, bald, extra limb creature. She wants him to fight Martin (voiced by Aziz Ansari), the leader of the Palae-men. Hatred and Tom (last of the green suits) get captured. Hatred finds out the workers have an built an entire mythology in the span of three months. We also learn Hatred’s man boobs have really grown and his first name is Courtney, after his grandmother. 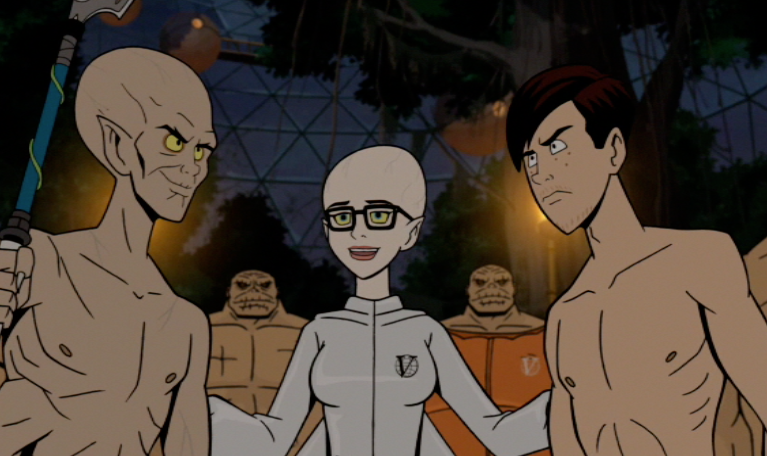 The inside of the E-Den has been transformed into an Ewok type village. Here Dean fights Martin and actually wins, thanks to his wicked Indian burns and Indian leg wrestling. After Dean becomes their “leader,” the village breaks out into the infamous Ewok party scene from Return of the Jedi.

Meanwhile, the Monarch tracks down 21 at the compound and is still convinced he’s working for him. The Monarch learns about the mutations and wants to create his own race of super Henchmen. As Dr. Mrs. the Monarch explains all she knows about the creator of the mutations, at the compound Rusty finally realizes he must do something. Too bad his “something” is creating a cocktail of antibiotics and roofies and playing Oregon Trail.

In the end, it’s Dr. Mrs. the Monarch who stops the mutation by releasing butterflies with the antidote into the E-Den. Rusty also releases his worthless cocktail, which does nothing but make everyone high. It even flows through a pipe leading to the Cocoon.

After the credits, we see the Monarchs blitzed out of their heads on Rusty’s roofies. It’s a silly, touching moment as they stumble through words like “anti-fly” and “butterdon’t.” 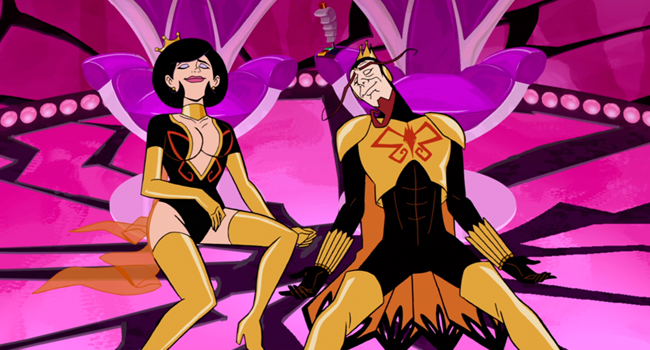 Hench T-Shirt by WinterArtwork $10 on TeeFury