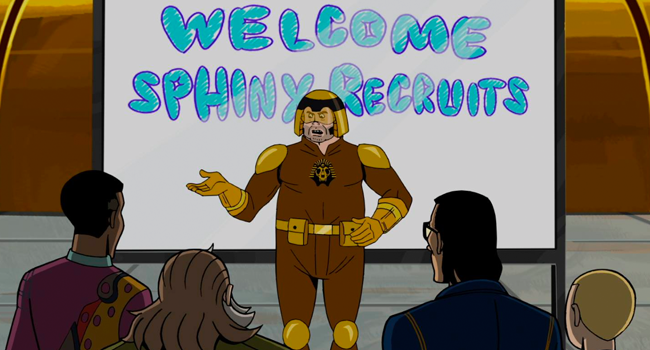 In last week’s episode of SPHINX Rising, we get a major revelation, some SPHINX back-story, and a look at what the O.S.I. is doing under Hunter’s leadership. Beyond the plot juggling, the episode explores how Gary (21, the Viceroy) is struggling to find his place in the Guild.

As we’ve seen before, Gary is still patrolling the old SPHINX building on the Venture compound. Unsure of his boundaries, he accidentally screws up an O.S.I. sting operation. Not only does he ruin Shore Leave’s and Brock’s mission, but he kills an eight year old villain named “Short Division.” Brock also realizes Gary’s been using his crossbow.

Back at the compound, the Monarch is hovering over and about to release an “acid magnet.” He’s still in denial that 21 is gone. As this is playing out, Hatred and Gary monitor the situation. This exchange is great, since Gary knows exactly how the Monarch will deal with anything. Once Hatred takes a shot at the Cocoon and disables the acid magnet, Gary correctly predicts that the Monarch will do something completely stupid. Right on cue, the Monarch jettisons the lunchroom onto the Venture lawn. 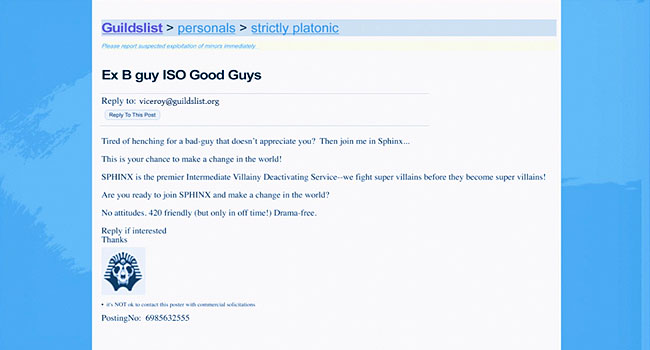 Just like in season two, Gary decides to starting recruiting. Instead of henchmen, he’s looking for new SPHINX members. Among the recruits is Hank, who is “ready to be a man,” and wants to fulfill his Destiny. Hatred overhears this, and he’s convinced Hank is dating a girl named Destiny.

The Monarchs have a pretty fool-proof plan to get into the Venture compound. Using high tech Bio-Plastique masks, they both transform themselves into middle aged men. It’s a really creepy image, especially since they do nothing to change their very noticeable voices. We also learn the Monarch doesn’t have many “normal” clothes besides a winter coat and novelty shirts from his bachelor party. 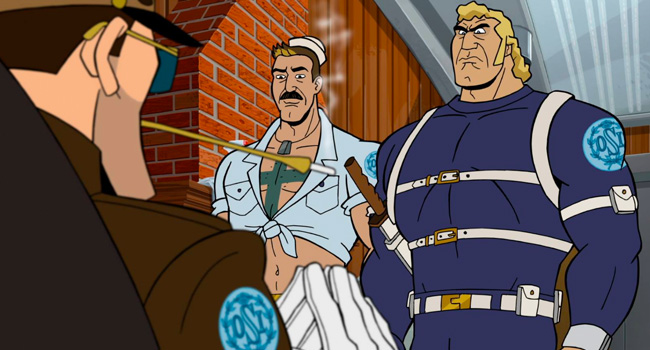 Meanwhile, both O.S.I. and SPHINX are holding pep talks. Hunter, of course, is gruff and to the point. Gary wants cool code names and gives some rules about snacking at work stations. Hunter also wants to know why Gary “isn’t in a body bag” after his screw-up. Gary promises his new members personal pan pizza and jumps to the conclusion that they are old O.S.I. agents.

The Monarchs get to the compound and manage to get inside by pretending to be “Beaver Inspectors” as that’s the novelty shirt the Monarch’s wearing. Under the compound, the Monarch makes “beaver noises” while Dr. Mrs. the Monarch gives Rusty a line of bull about the dangers of the animal. The Monarch also plants explosives disguised as “beaver deterrents.”

During a sort of heart to heart moment between Hatred and Dean, they discover the Monarch’s explosives. Hatred blames Gary and they leave the bombs in front of the SPHINX part of the compound.

The very eager SPHINX crew includes Hank wearing a slinky strong suit that has boobs. He renames himself “Destiny.” The other members all look like Cobra wannabes. Gary quickly loses control of the situation as it’s revealed the crew is actually old SPHINX, the bad guys who fought O.S.I. They are flying directly to Hunter and the O.S.I. Gary and Hank are put in a jail cell. 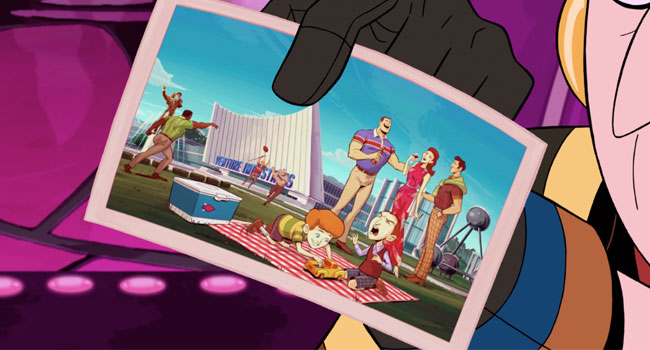 The events at the compound take a weird turn, as Rusty is showing the still disguised Monarchs old family photos. Hatred burst in and tells Rusty about an “explosive situation.” Rusty leaves, the Monarch steals a photo, and Dr. Mrs. the Monarch realizes Hatred found the bombs.

At the Cocoon, a bombshell is dropped. The picture the Monarch stole shows himself as a kid playing with a young Rusty on the Venture lawn.He’s crying as Rusty plays with a fire truck. His parents are talking to Jonas. In the background, the Action Man, Swifty, and Colonel Gentleman are playing football. The Monarch claims not to remember this. The revelation that his parents knew Jonas is huge. Were the Monarch’s parents part of Jonas’ swinger parties? Why doesn’t he remember hanging out with Rusty as a kid? Hopefully, we’ll get some answers in this season. 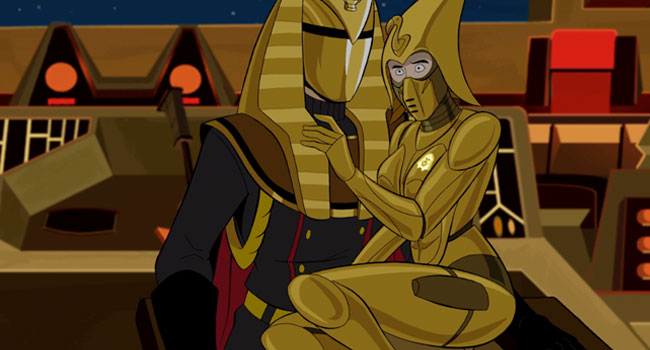 Back with SPHINX, Gary and Hank break out of jail. Hank threatens to go “karate bananas” on the “new”commander. Instead, “Cobra Commander” can control Hank’s suit. Brock finds Hanks sitting on the commander’s lap. It’s the Countess’s armor he’s been wearing and now he can’t move. Brock tells him to close his eyes as he shoots the commander with his crossbow. Gary calls himself a loser, but Brock seems to have taken a liking to Gary and gives him his crossbow.

After the credits, we see both the O.S.I and the Cocoon about to blow up their respective targets. Hunter explodes the giant SPHINX ship, while the Monarch thinks he’s blowing up the compound. Of course, the only thing that is destroyed is the SPHINX building.