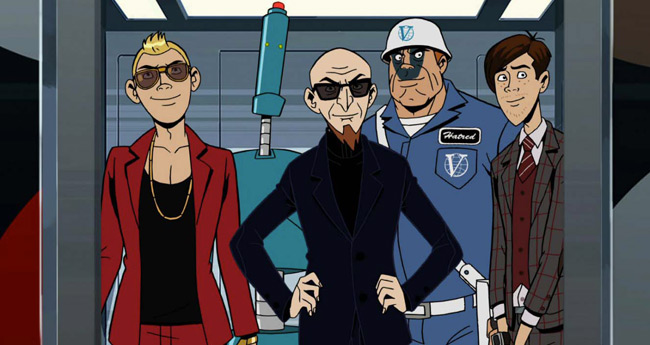 Picking up right where they left off at the end of “All This and Gargantua-2,” the Venture compound is still in ashes. Of course, the family also inherited everything from Jonas Jr and they waste no time becoming accustomed to the life of luxury. Rusty fires every employee of Jonas’ and Hank quickly turns into a playboy with a horrible haircut. Only Dean makes a reasonable decision and goes to check out a college.

With this new location, there are new characters to be dealt with. The first group is an Avenger like band of superheroes for hire. The Crusaders Action League take it upon themselves to show up unannounced and give Rusty a sales pitch. He’s obviously not impressed, calling them the cast of “Godspell.”

Meanwhile, what’s left of the Council of Thirteen (now Six) are in space trying to decide how to handle the death of the Sovereign. Even though Dr. Killinger brought them all together, he just leaves them with the handbook and advice on how to move forward. 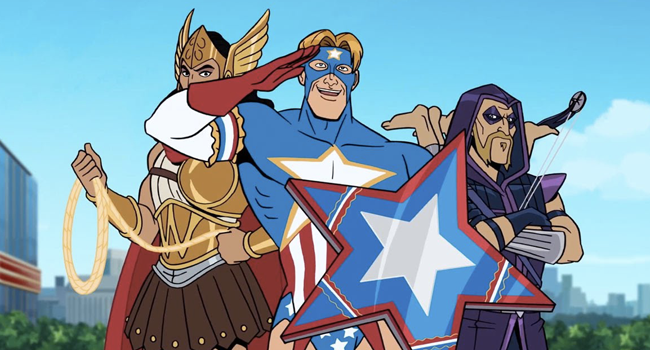 Next, we see Dean at college where he runs into an out of costume Brown Widow. He recognizes Dean immediately and is still eager to help Rusty bring his Broadway dreams to life. He’s not the most popular man on campus, though. When someone throws an energy drink at his head, he “craps his pants,” and not for the first time we learn. The bully turns out to be a professor and he looks like one of the Crusaders. He’s even called by the same name.

Back on Earth, the Council has a meeting with the other members of the Guild. Phantom Limb’s ruse of playing the Sovereign’s head is quickly found out. The crowd gets angry as Dr. Mrs. the Monarch tries to calm them. The Guild is going to try for a democratic approach, instead of a new leader, they will screen candidates to fill the remaining seats.

Hank has managed to go completely nuts with the money. His “Hank Cave” looks like a cirius/toy store. But, the most outrageous purchase just might be Dean’s new live, fully grown giraffe named Mr. Reachmore. While Rusty is freaking out, Brock shows up as their new/old bodyguard. Maybe Brock can tone down the insanity a tad. Hatred isn’t taking the news well and visits Hunter. Since the only other bodyguard gig includes a nine year old boy who is “as cute as a button,” Hunter gives him two options: the desk or the door.

The Council decides to try and woo Wide Whale, an important member of the Guild’s NYC leadership. They convince Dr. Mrs. the Monarch to visit him, since he won’t say yes until he sees her. Wide Whale lives up to his name and the gigantic man’s corduroy suit is so noisy it make negotiations difficult. It also doesn’t help that he immediately begins hitting on her. While it seems he only wants her for for her looks, it becomes clear that his plan runs much deeper than that. She’s the key to get what he truly wants, exclusive arching rights to the Ventures. 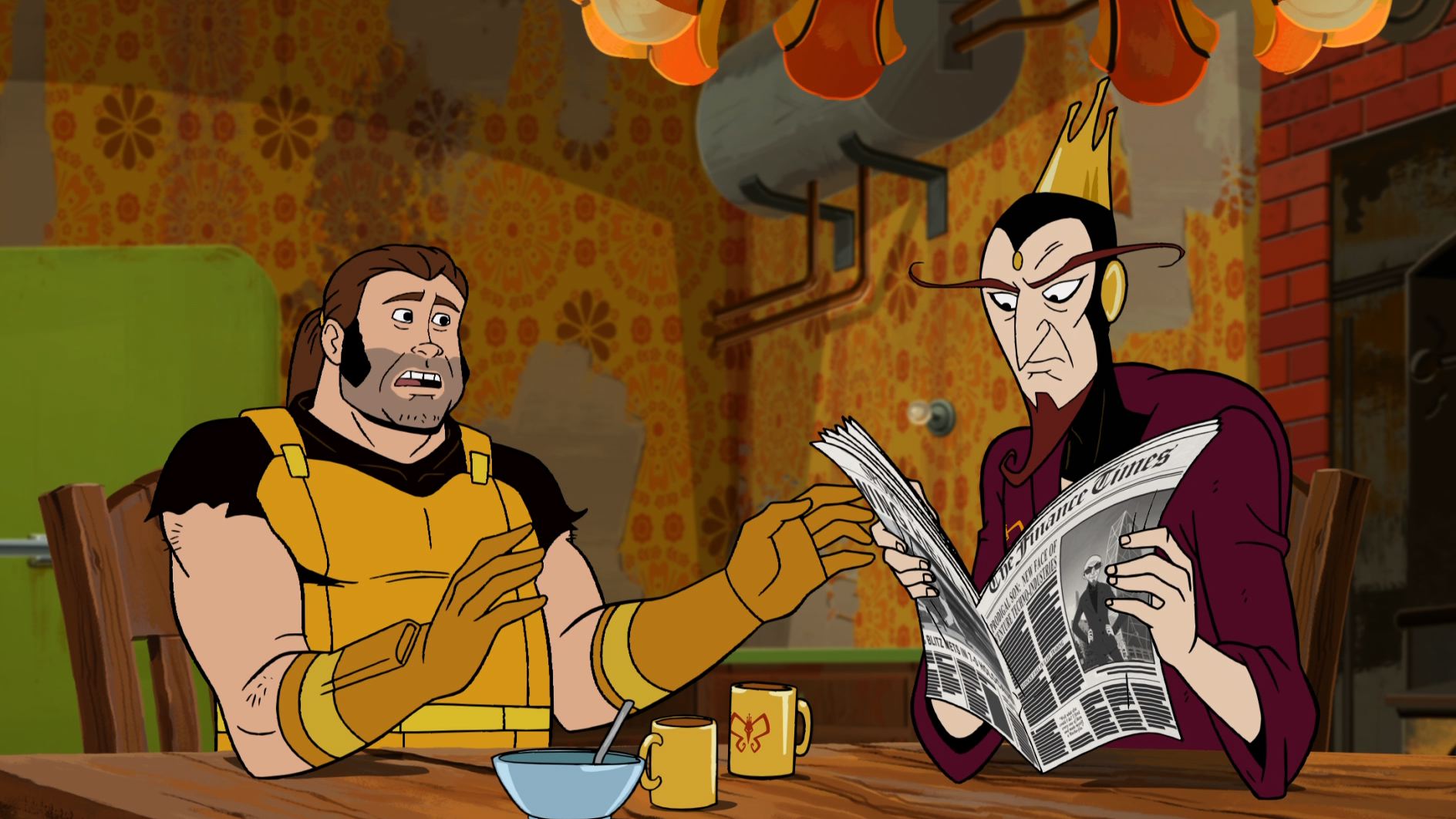 Of course, the Monarch isn’t going to sit around in New Jersey while his arch is just across the river. Their first poorly thought out plan involves them standing outside the Venture building, with 21 as the Naked Cowboy and Monarch as the Statue of Liberty. The Pirate Captain quickly catches on and chases them away.The Monarch couldn’t even be bothered to change out of this yellow boots for the costume. Their next plan involves getting uniforms from the Venture building. The person fixing up the Monarch’s house just happens to have Venture uniforms.. They manage to get into the elevator where they find a relapsed Captain jonesing for darts. The Monarch tries the retina scanner and the elevator shuts down. While the scan failed, I wouldn’t have been surprised if worked, considering the scraps of evidence through the seasons that suggest Rusty and the Monarch are perhaps related in someway.

Meanwhile, Hank spys a cute girl across the way. She’s in a pool and he’s certain she drowned. He steals Brock’s grapple gun and goes to save her. Brock tries to stop him, but the fake Avenger clan shows up again. In true Brock fashion, he starts to beat the crap out of them. H.E.L.P.eR tries to join the fight, but Jonas’ J-bot gets there first. As Hank is trying to break the glass, he sees that the girl has gills and is alive. As he wipes his brow, he begins to fall. He’s saved by another hero called Night Dick. Brock gets taken down by the Crusaders and it’s Rusty who saves him by yelling at them. 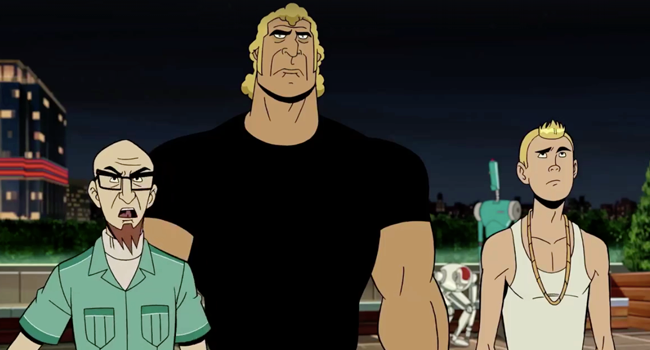 The Monarch and 21 escape the elevator by using the drugged out Captain’s eye. They’re picked up by Dr. Mrs. the Monarch outside of the Venture building. It seems she accepted Wide Whale’s request and breaks the news in the same way she did at the end of season two.

In the after credits scene, the Crusaders are leaving the Venture building. Night Dick tells them Hank laughed at his name. While everyone is preoccupied, H.E.L.P.eR pushes J-bot off the roof.


What did you think of about the new episode? Sound off in comment section below!

The Venture Bros. ‘A Party for Tarzan’ Recap